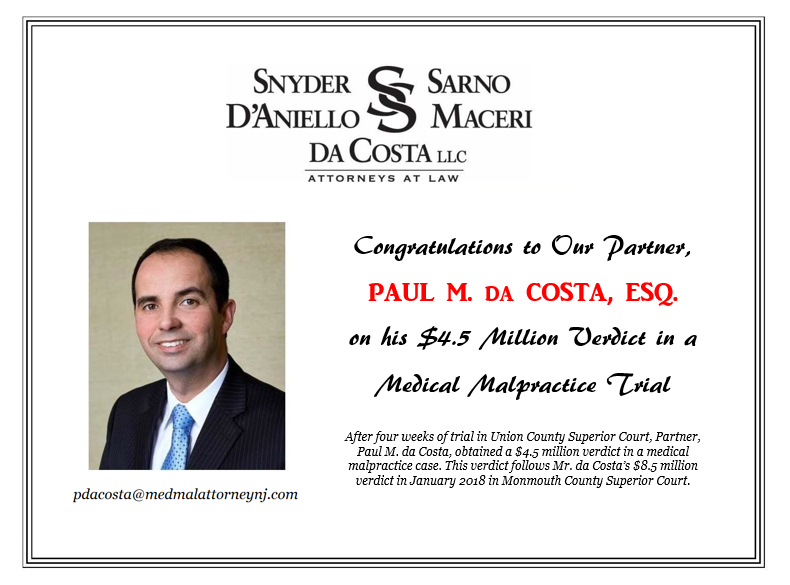 On March 28, 2011, Plaintiff underwent a posterior lumbar interbody fusion (“PLIF”) surgery in his lower back (L5 – S1 level) to address a prior work injury he had suffered in June 2008. The surgery was performed by the two Defendants, a neurosurgeon and an orthopedic spine surgeon. Part of the surgery required the surgeons to place hardware in Plaintiff’s lower back, which involved the placement of four pedicle screws.  Plaintiff alleged that the Defendants deviated from accepted standards of care in failing to place the right-sided L5 pedicle screw into the pedicle.  Furthermore, Plaintiff asserted that it was a deviation on the part of the Defendants to place the pedicle screw inside of the spinal canal.  Such misplacement of the screw caused Plaintiff to suffer new right lower extremity symptoms that he did not have prior to the surgery. During the post-operative period, Plaintiff also claimed that the Defendant neurosurgeon failed to timely diagnose and replace the malpositioned pedicle screw. The misplaced screw went undiagnosed by Defendants until January 2013, nearly two years after the surgery. Consequently, Plaintiff required a revision surgery to remove the misplaced pedicle screw, which Plaintiff contended was impinging on his L-5 nerve root and was causing him his post-operative symptoms. Plaintiff also suffered mental pain and suffering caused by the misplaced screw in his spinal canal.

Through the use of expert witness testimony, Mr. da Costa was able to prove to the jury that by misplacing the pedicle screw during the surgery, and failing to timely diagnose and correct the malpositioned screw, Defendants deviated from accepted standards of care. He was also able to prove that the misplaced screw was the cause of the Plaintiff’s subsequent physical, mental and economic damages. Defendants asserted that Plaintiff was seriously injured by his work accident, such that any damages claimed were all due to the pre-existing injury.  Moreover, the defense argued that the Plaintiff’s new right lower extremity symptoms were not related to the pedicle screw in his spinal canal; rather, Plaintiff’s right lower extremity deficits were proximately caused by a traction injury during the surgery.

By was of fearless and aggressive cross-examination of the Defendants and their respective expert witnesses, Mr. da Costa was able to obtain critical admissions. For example, Defendants and their experts admitted that a pedicle screw should not be placed completely outside and medial to the pedicle and into a patient’s spinal canal. They also admitted that, more likely than not, Plaintiff’s symptoms and damages were caused by the misplaced screw impinging on the right L-5 nerve root since a traction injury would not likely last more than a few days or weeks. These admissions in conjunction with Mr. da Costa’s impassioned closing argument proved to be crucial in obtaining justice for the Plaintiff.

If you believe yourself to be a victim of surgical error or any other type of medical malpractice, please contact Paul M. da Costa, Esq. at Snyder Sarno D’Aniello Maceri & da Costa LLC. Call us today at (973) 274-5200.