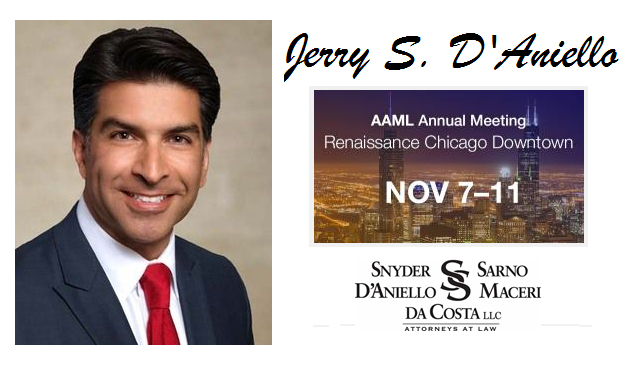 Jerry S. D'Aniello, a partner at Snyder Sarno D'Aniello Maceri & da Costa LLC, will be speaking at the 2017 American Academy of Matrimonial Lawyers (AAML) beginning on November 7th.  The event will take place at the Renaissance Hotel in Chicago, IL.  Jerry is currently the President-Elect of New Jersey Chapter of AAML, and he will take over as President in 2018.

Jerry will speak on Saturday, November 11th at 11:00 a.m., on the panel focusing on Smart Tips for Smartphones, discussing various uses of cell phones in practice.

In addition to his extensive experience in all areas of matrimonial law, Jerry is a highly skilled mediator and arbitrator.  His breadth of knowledge will surely be on display at the event, and we encourage your attendance to learn more about the rapidly evolving field of family law.

* Our firm includes lawyers who have been included in the list of Best Lawyers published by the Best Lawyers in America in (nee to list years). The list is generated entirely on peer review. No aspect of this advertisement has been approved by the Supreme Court of New Jersey.

** Newark Family Law Mediation is a category under Best Lawyers. These listings are based entirely on our peer-review process; a lawyer is selected for inclusion if they receive the required feedback during our voting period each year. Ballots are sent out to our listed lawyers based on metropolitan area and practice area.

*** Our firm includes lawyers who have been included in the New Jersey Super Lawyers list published by Thomson Reuters in (need to list years). The list is generated using a patented selection process involving three basic steps: creation of the candidate pool using peer nominations; evaluations of candidates by the research department; and peer evaluation by practice area. No aspect of this advertisement has been approved by the Supreme Court of New Jersey.