What is Included in College Costs? 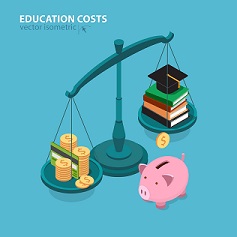 It is well known that parties are often ordered to share college expenses.  Most divorced parents agree to do so.  The question often arises, however, as to what expenses are included in college costs.

The New Jersey Appellate Division recently addressed this issue in the unpublished case of Cortopassi v. Cortopassi.  When the parties in Cortopassi divorced, they agreed to split the college costs for their son, which included “tuition, room and board after scholarships, grants, and 529 plan funds.”

In 2013, Defendant filed a motion to enforce litigants’ rights, requesting reimbursement of costs associated with the child’s college attendance.  The trial court ruled in favor of Defendant and ordered Plaintiff to pay his half of the college costs, despite his claims that the parties had agreed to pay for college using their home equity loan.  Plaintiff later challenged, in a motion that the court considered one for reconsideration, the computation of money that Defendant alleged she paid out of pocket and thus, he owed to her, but the judge disagreed with Plaintiff’s allegations.

On appeal, the Appellate Division agreed with the trial judge.  The Appellate Division pointed out that it was proper for the trial court to have considered Plaintiff’s claim a motion for reconsideration.  However, a motion for reconsideration is only proper where there is new evidence or the court acted arbitrarily, not for general dissatisfaction with an outcome.  See Palombi v. Palombi, 414 N.J. Super. 274, 289 (App. Div. 2010);D’Atria v. D’Atria, 242 N.J. Super. 392, 401 (Ch. Div. 1990).  Thus, Plaintiff’s claim here was invalid.

Furthermore, it was proper for expenses other than tuition, such as those for housing or technology, to be included as college expenses that the parties intended to share, especially because Plaintiff failed to originally raise this issue in his initial pleadings.

If you are going through a divorce and have questions about who must pay the cost of your child’s college education, call the experienced attorneys at Snyder & Sarno, LLC who can help you with your case.  Contact us today at (973) 274-5200.