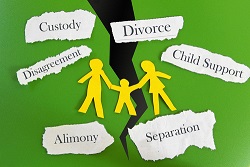 In child support or child custody matters, it is often the case that the parties, even after having their dispute decided by a court, agree to new terms through some type of oral agreement.  In some instances, the parties may bring their new agreement to the court to be entered as a binding order.  This was the situation in the recent unpublished Appellate Division case of Lewis v. Lewis-Glogorski.

In Lewis, the parties had two children.  The parties initially agreed that Defendant would be the parent of primary residence and that Plaintiff would have parenting time and pay child support.  Plaintiff then moved to California for business, Defendant moved to Florida with the child’s youngest son, and the eldest son stayed in New Jersey to finish his senior year of high school.

The court appointed a guardian ad litem in the case after Plaintiff alleged that Defendant had alienated the children from him.  The guardian ad litem testified that he worked out an oral agreement between the parties whereby Plaintiff would support and have custody of the eldest son during his senior year of high school while Defendant would support and have custody of the youngest son.  Neither party would pay child support to the other.  Each party acted in accordance with this oral agreement.  The trial judge entered an order memorializing the parties’ oral agreement, but did not limit the modification to one year—the time when the oldest son was still residing in New Jersey to finish school.

On appeal, the Defendant took issue with the fact that the trial judge’s order was left “open-ended.”  The Appellate Division agreed with Defendant, especially because the judge had expressed in a written opinion that the modification would last until the oldest son went to college.  Ultimately, the Appellate Division remanded the case for the trial court to clarify its order.

This is a case where the parties’ oral agreement was somewhat muddled when brought before the court to be memorialized in an order.  This case exemplifies the need to speak with an attorney in such cases to ensure that each party’s obligations are clear.  If you currently have questions about modification of child support or child custody obligations, you should contact the experienced matrimonial attorneys at Snyder & Sarno, LLC to have your questions answered.  Call us today at (973) 274-5200.