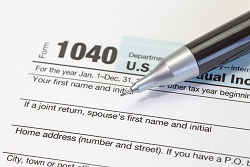 April 15th is the nationwide tax deadline.  For many, the date comes as a relief.  However, the process of filing taxes can often be complicated.  In particular, the issue of which parent can claim the children as dependent is often a contentious issue that has been frequently blogged about.

The Internal Revenue Service (IRS) mandates that only one parent can claim a child as a dependent, unless the parents are filing a joint return.  Where parents are separated, they often disagree as to which parent should claim the child or children on their tax return.

When either parent can claim a child, the IRS will apply a tiebreaker rule. Generally, the parent who cares for the child 50% or more of the time will be the parent eligible to claim the tax benefit.  In many situations, however, which parent claims the child as a dependent can be negotiated between the parties.

For example, some parents will alternate claiming the child from year to year.  Where there are multiple children, the parents may decide that one parent will claim one child while the other parent will claim the second child.  In addition, the parent that receives a greater benefit from claiming the children as a dependent when the effect on the other parent is negligible may want to claim the children as dependent.

Ultimately, when it comes to which parent should claim the children as dependents in their tax filings, it is often helpful to speak with an experienced matrimonial attorney regarding the issue.  If you have questions about this subject, call the attorneys at Snyder & Sarno, LLC at (973) 274-5200.