Who Pays for Private High School? 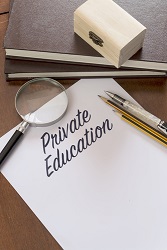 It is often the case that divorced or never-wed parents must contribute to their child’s college expenses.  When the issue is payment of private middle or high school tuition, a parent may also be required to contribute to that expense.  This was the issue in the recent unpublished New Jersey Appellate Division case of L.B.G. v. J.P.G.

In L.B.G. v. J.P.G, plaintiff enrolled the couples’ child into a parochial middle school after he was bullied in public school.  Defendant opposed the move to a private school and sought to enjoin plaintiff from enrolling the child in a parochial high school.  If that was not feasible, defendant sought to avoid having to pay the cost of such a school.  The trial court ruled that defendant could not enjoin plaintiff from enrolling their child in parochial high school because a presumption existed in plaintiff’s favor relating to the choice of the child’s school and defendant had failed to overcome that presumption.  However, the court ruled that plaintiff would have to bear the entire cost of that school, effectively creating a presumption in defendant’s favor as to the cost.

On appeal, the Appellate Division restated the relevant law.  In particular, the court said that a party seeking modification of child support, including contribution toward private school, typically has the burden of proof to show there is some type of changed circumstances warranting modification.  See Miller v. Miller, 160 N.J. 408, 420 (1999).  However, the court’s paramount consideration should always be the best interests of the child.

Thus, according to the Appellate Division, the trial court erred when it applied a presumption in favor of defendant when deciding which party should pay the costs of parochial school.  Specifically “the result failed to acknowledge or address defendant’s obligation to support [the child’s] best interests.”  Citing Martinetti v. Hickman, 261 N.J. Super. 508, 513 (App. Div. 1993).  Rather, the court said that the trial judge should have considered the factors set out in Hoefers v. Jones, 288 N.J. Super. 490 (Ch. Div. 1994), aff’d o.b. 288 N.J. Super. 378 (App. Div. 1996).  In Hoefers, the court laid out fourteen factors to be considered in a case where one party seeks contribution towards private school tuition from the opposing party. Thus, the case was remanded to the trial court to address the relevant factors.

If you are currently arguing with your ex-partner about child support, or specifically, payment of private school tuition, it could be helpful to speak with an experienced matrimonial attorney.  Call the attorneys at Snyder & Sarno, LLC at (973) 274-5200 today for help with your case.