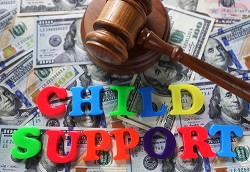 Child support is the obligation of one or both parents to financially support the needs of their children.  Child support is often a contentious issue, but may become even more debated when the parent paying child support goes to prison.  This was the case in Rubino v. Rubino, a recent unpublished Appellate Division case.

In Rubino, defendant was charged with endangering the welfare of a child, criminal sexual conduct, and stalking in January 2007.  He was sentenced to probation, but was later imprisoned because of probation violations.

On appeal, defendant argued that the COLAs should be vacated because he never received notice of those changes.  In particular, he argued that he was in prison at the time the adjustments were made.  The Appellate Division concluded, however, that he was required to make his new address known to the Probation Department.  In addition, there was no evidence that even if the Probation Department knew of his imprisonment, that they failed to provide him with any documentation relating to the COLAs.  Thus, the Appellate Division upheld the trial court’s decision denying defendant’s requests on this issue.

In addition, the Appellate Division also upheld the trial court’s denial of defendant’s requests for a modification of his child support award.  Defendant argued that the trial court should reconsider the issue under the framework established by Halliwell v. Halliwell, 326 N.J. Super.  442 (App. Div. 1999) whereby incarcerated individuals can seek suspension of their child support obligations while imprisoned.

The Appellate Division pointed out that while defendant had sought to reduce his obligation before he went to prison, he failed to assert that as a basis for the modification.  Moreover, defendant failed to include a completed Case Information Statement so that the court could determine whether there was a change in circumstances warranting modification.  Subsequent motions for modification were denied because they were not properly served on plaintiff or her attorney.  In addition, the trial court also denied defendant’s third motion for modification only because the judge ordered discovery to be completed.

If you have a child support question, particularly where the payor is imprisoned, you should contact the skilled attorneys at Snyder & Sarno, LLC to have your questions answered.  Call us today at (973) 274-5200.