Why Numbers Are Important in Matrimonial Law 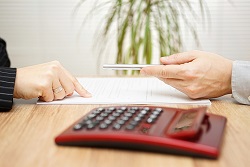 When it comes to family law cases, many people do not realize how important it is that the numbers being utilized are accurate.  Nevertheless, in cases involving issues such as alimony, child support, and property division, it is clear that numbers often become points of contention as parties argue over the distribution of money.  The recent unpublished New Jersey Appellate Division case of Kaller v. Gogan, shows exactly why it’s important for a court to have specifics when it comes to issues involving money.

In Kaller, the trial court decided to reduce defendant’s alimony obligation from $346 per week to $175 per week.  When the decision was appealed, the Appellate Division remanded.  The Appellate Division was perplexed as to how the trial judge concluded that plaintiff had an annual income of approximately $12,000 even though she reported that she earned about $400 per week for the year.  Assuming her weekly income was correct, she should have earned nearly $20,000 for the year.

This case exemplifies the need for parties to provide the court with accurate figures in cases involving money, and in turn, shows how any miscalculation or misinformation can drastically change the outcome of a case.  In addition, seeking the help of an experienced matrimonial attorney can make the process of providing information to the court and seeing that it is correctly calculated during any proceedings much easier.  If your current case involves alimony, child support, property division, or any other matrimonial issue, call the attorneys at Snyder & Sarno, LLC at (973) 274-5200.