How Can the Judge Impute Income When I’m Working? 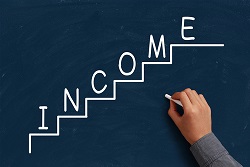 When it comes to determining child support or alimony, if a party is not earning up to their full potential, income will often be imputed to that party.  The imputation of income often makes parties nervous because their child support or alimony obligations are then determined based on what one may consider a hypothetical salary.  This is one issue that was recently addressed in the unpublished New Jersey Appellate Division case of Elrom v. Elrom.

In Elrom, the Appellate Division decided that the court could impute income to the Defendant even though he was working a full-time job.  The court stated that when a trial judge imputes income, it is proper for the judge to “examine ‘potential earning capacity’ rather than actual income.”  Halliwell v. Halliwell, 326 N.J. Super. 442, 448 (App. Div. 1999).  The Defendant in Elrom had reported his income as $120,000 per year, but all evidence supported the fact that Defendant was capable of earning nearly double this income.  In particular, he had earned anywhere from $200,000 to $300,000 per year in the three years prior to the case.

On the other hand, the Appellate Division found that the trial court’s imputation of income to Plaintiff of approximately $80,000 per year, the salary she had last earned, was appropriate.  Even though she had previously earned about $175,000 as an attorney in New York City, after the couple separated she became the primary caretaker of the children, thus making it reasonable that she would have lesser income.  In particular, the judge noted that the children’s needs are to be taken into consideration when setting a child support award.  See N.J.S.A. 2A:34-23(a)(1); Pascale v. Pascale, 140 N.J. 483, 594 (1995).

If you are going through a battle with an ex-spouse over child support or alimony, and imputed income may be an issue, it can be helpful to seek the aid of an experienced matrimonial attorney.  Call the attorneys at Snyder & Sarno, LLC at (973) 274-5200 for help with your child support case.