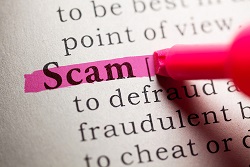 Recent reports of a child support scam in Minneapolis would likely cause outrage among most men.  Reports indicate that T.K. met Jhona Vandemore on an online dating website and eventually met in person.  A few months after the couple met, Vandemore told T.K. that she was pregnant.

When T.K. asked for a paternity test, Vandemore claimed that obtaining a paternity test would require her to file for child support with the courts.  Rather, she hoped the couple could come to an agreement on their own.  Thus, T.K. agreed to pay her $1,000 per month in child support.

Over the years, Vandemore sent T.K. pictures of the child and a birth certificate.  T.K. ended up paying over $100,000 in child support payments.  When T.K. married, however, his new wife became suspicious and hired a private investigator.  The investigator discovered that Vandemore had concocted a scam—she did not have a child.  In fact, the pictures she sent to T.K. were pictures of her cousin’s child and she forged the birth certificate.   Vandemore recently pled guilty to federal charges stemming from the incident.

If you currently have a child support case that involves paternity, make sure you speak to a lawyer about your legal rights.  Call the experienced matrimonial attorneys at Snyder & Sarno, LLC for help with your child support case.  We can be reached at (973) 274-5200.