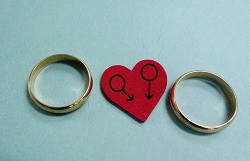 A few weeks ago, the Associated Press reported that the U.S. Supreme Court announced that it would finally hear a case on the issue of whether or not same-sex marriage should be legal across the country.  The Court will also hear oral argument on whether or not a state that currently bans gay marriage should be required to recognize the marriage of a same-sex couple that was performed in a state where same-sex marriage is legal.

The Court’s decision is expected in June, at which point the nation will hopefully have an answer to this hotly debated issue.  Until then, however, same-sex marriage will remain legal in states like New Jersey, and similarly, divorce laws will also apply equally to same-sex couples.

If you are in a same-sex marriage, or want to get married, call the experienced attorneys at Snyder & Sarno, LLC today for answers to any questions you may have about your legal rights.  We can be reached at (973) 274-5200.