“I Never Received That Document” – How Can This Affect My Case? 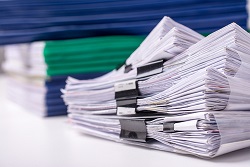 The due process right to service of process has been considered a vital right throughout history.  This means that, in legal proceedings, all parties shall be given notice of any documents filed against him or her.  This right allows any party to mount a defense to the opposing party’s allegations.  In the recent case of S.B. v. W.B., this basic right was at issue.

In S.B v. W.B, the parties were married for approximately 10 years, during which time they had two children.  The parties’ Property Settlement Agreement provided that the parties would split the cost of extra-curricular activities that were approved by both parents.  The parties, however, disagreed over which activities the children should be enrolled in, and thus, payment for those activities.

After the parties filed numerous motions, the court ordered that defendant pay $1,245 to plaintiff to reimburse her for extra-curricular activity expenses.  Defendant sought to have this obligation dismissed because he was never served with the motion wherein plaintiff sought $1,245 from him, which the court ultimately relied on in fashioning the award.  The trial court, however, declined to reconsider the obligation because the trial court found that defendant had not filed the motion in the time allowed by the Rules of Court.

On appeal, the New Jersey Appellate Division disagreed with the trial court.  Rather, the Appellate Division stated that defendant’s motion should have been considered a motion to vacate, not a motion for reconsideration, particularly because the issue involved a party’s due process rights to service of court documents related to the proceeding.  See H.E.S. v. J.C.S., 175 N.J. 309, 321 (2003).

The Appellate Division, however, stated that even if the defendant was not served with this motion, if he has no viable defense to the court’s award, then the obligation should not be vacated.  On this matter, the court remanded the decision so that the trial court could determine whether defendant could legitimately oppose plaintiff’s request for $1,245.

In any legal proceeding, there are many procedural requirements that can have serious consequences if not followed.  Most times, however, the help of an experienced matrimonial attorney can avoid these types of problems.  If you need help with your child custody case, call the attorneys at Snyder & Sarno, LLC at (973) 274-5200.