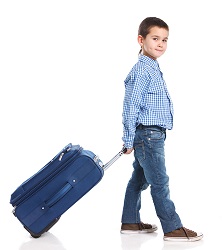 Co-parenting can often be a struggle for any newly divorced couple.  Most parents, however, don’t have the added difficulty of one parent living in a foreign country.  In the recent case of Costa v. Costa, however, the father’s move to Brazil presented custody problems between the parties.

In Costa, the parties had two children together.  When they divorced, their Property Settlement Agreement stipulated that the couple would share joint legal custody.  The children would live with their mother and their father would have scheduled visitation.  Three years later, however, the father moved to Brazil.  The parties maintained joint legal custody, and instead of the father having physical visitation, he kept in contact with the children via various forms of telecommunication.

While this arrangement worked for a number of years, the mother filed for sole legal custody in 2013 because she argued that the father was uncooperative in having necessary forms authorized and notarized in order to renew the children’s passports.  The father countered that he attempted to provide the necessary paperwork but was unable to do so correctly. As a result, he consented to allowing the court to issue an order directing that the mother had sole control over the children’s passport renewal and travel without needing his authorization.  The father, nevertheless, wanted to maintain joint legal custody.

The trial court denied the mother’s application for a modification of custody.  The court stated that the mother had failed to show that there were any changed circumstances warranting a hearing to decide whether a modification would be in the children’s best interests.  See Beck v. Beck, 86 N.J. 480, 496 n.8 (1981); Crews v. Crews, 164 N.J. 11, 28 (2000).

On appeal, the New Jersey Appellate Division affirmed the trial judge’s decision.  First, the Appellate Division pointed out the fact that the father had agreed to allow the mother to solely make decisions regarding passports and travel, which is allowed under 22 C.F.R. § 51.28(a)(3)(ii)(E) if the court issues such an order.  The court noted that the mother would simply have to request such relief.

Moreover, the Appellate Division stated that one parent’s move to a foreign country alone is not enough to qualify as changed circumstances necessary for a child custody modification.   In particular, the father’s move to another country did not affect his ability to participate in major decision-making regarding the children, thus there was no reason to disturb the party’s legal custody arrangement.

If you have a custody order in place but there are circumstances warranting a change in the custody arrangement, you should consult a matrimonial attorney in order to evaluate your case.  The experienced attorneys at Snyder & Sarno, LLC can answer all of your custody questions.  Call us today at (973) 274-5200.