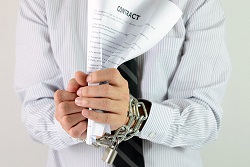 In many cases, parties who divorce or end their relationship are happy to come to an agreement settling their differences, which often means less cost and less contention.  There are, however, some instances where after an agreement is entered, one of the parties no longer wants to be bound by it.  This was the case in the recent Appellate Division case of R.R. v. R.N.

In R.R. v. R.N., the parties entered into a Domestic Partnership in 2005, but ended their relationship in 2011.  At that time, they signed a Property Settlement Agreement stating that the plaintiff would own two-thirds and the defendant would own one-third of their home in Ocean Grove, NJ.  The defendant would also have the right to live in the house for 10 years, after which either party could buy out the other’s share or sell the property.

Shortly thereafter, the plaintiff obtained a Final Restraining Order against the defendant due to the defendant’s stalking and harassment of the plaintiff.  As a result, the plaintiff sought a forced partition of the Ocean Grove property prior to the end of the 10-year period.  The trial court denied the plaintiff’s request and enforced the terms of the Property Settlement Agreement.

On appeal, the New Jersey Appellate Division stated that settlement agreements will not be set aside unless they are fraudulent or unconscionable, which the plaintiff failed to show in this case.  In addition, the Appellate Division said that even though there was a restraining order in place involving the parties, the order would not necessarily limit the defendant’s rights to the property.

The Appellate Division cited the case of Michalski v. Michalski, 50 N.J. Super. 454 (App. Div. 1958) for the proposition that a court could modify an agreement to force partition of a home, but this would only be done if there were extenuating circumstances.  In this case, however, the court decided that while the restraining order would make communications about the property more difficult, there were no extenuating circumstances that “destroy the intent of the parties” in forming the agreement.

If you are going through a divorce and settlement is a possibility, call the skilled attorneys at Snyder & Sarno, LLC to help ensure that your rights are protected in any agreement you enter into.  Call us today at (973) 274-5200.