Will My Child Have to Speak With the Judge in My Custody Battle? 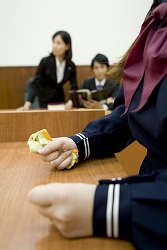 In child custody cases, the decision whether or not to have the judge speak with the children in an in camera or private interview is often based on various considerations.  For instance, the age, maturity, and emotional state of the child are often taken into consideration when deciding whether or not to request such an interview.  Under New Jersey Rule 5:8-6, a party may request that the judge speak with the child, or the court may decide to do so on its own.  This request must be made before any trial.  The Rule states that if the judge decides not to interview the child, his/her reasons shall be placed on the record.  In addition, the interview will be placed on the record, which will be made available to both parties for a fee, but, unless the court approves such communication, both parties are prohibited from discussing the contents of the interview with the child.

In any custody case, the trial court must keep in mind the “best interests of the child.” Beck v. Beck, 86 N.J. 480 (1981).   Under N.J.S.A. 9:2-4, the court may consider the child’s preferences in determining what is in that child’s best interests, assuming the child is of sufficient age and capacity.  Thus, deciding whether or not the benefit of a child interview will outweigh any potential harm to the child can be a difficult decision for a parent.

If you are currently involved in a custody case, the experience of skilled matrimonial attorneys, like those at Snyder & Sarno, LLC, can help you with your case.  Call us today at (973) 274-5200.