Property Division in Divorce: The Example of Carter v. Carter 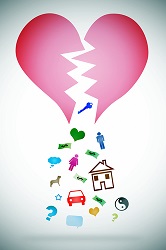 When a couple decides to divorce, there are often many issues that arise as the parties attempt to separate their lives.  One possible issue of contention is that of property division.  During a couple’s marriage, they often acquire a significant amount of property, like, for example, a house, cars, or personal belongings.  Dividing these assets, as well as debts, can often lead to a dispute in the divorce.

In New Jersey, property division is governed by statute—N.J.S.A. 2A:34-23(h).  Courts have held that it is only fair for the parties to split all of their property upon dissolution of a marriage.  Pascale v. Pascale, 140 N.J. 583 (1995).  Thus, a trial court will equitably divide all marital assets in a divorce, which includes all property and debts acquired during the marriage.  When dividing assets, a trial court will examine a number of factors outlined in the New Jersey statute in order to divide the property, and won’t “mechanically divide” the property.  Stout v. Stout, 155 N.J. Super. 196 (App. Div. 1977).

Recently, in Carter v. Carter, the New Jersey Appellate Division looked at a case where equitable distribution was an issue.  In Carter, the parties were married for 20 years and had four children.  During the course of their marriage, they borrowed a significant amount of money from plaintiff’s parents, which they agreed to pay back after signing a promissory note. The trial court found that in regards to the marital home, the parties would sell the home and split the proceeds when their youngest child graduated from high school in 2017.  Until then, defendant would pay child support and plaintiff’s parents would help pay for expenses involving the home, such as utilities and the mortgage.  The trial court explicitly stated that this was not only in the best interests of the children, but was the “fair result.”

In 2010, defendant learned that the home was in threat of foreclosure, so he filed a motion to obtain his half of the equity in the home.  The trial judge, after accounting for the mortgage due on the property and all money due to plaintiff’s parents under the promissory note, determined that there was essentially no equity in the home and defendant was owed nothing.

On appeal, defendant alleged that the trial court misinterpreted the promissory note pledging to pay plaintiff’s parents, and thus, the trial court’s calculations were wrong. The Appellate Division, however, disagreed with defendant and decided that the trial judge had correctly read the promissory note to require repayment of all past and future advances of money from plaintiff’s parents. In order to equitably divide the marital assets in Carter, the court took into consideration the parties’ major asset, their home, and any outstanding debts, their mortgage and all money owed according to the promissory note.

In many divorce cases, parties have substantial assets worth hundreds of thousands of dollars, and consequently, the division of property can become a contested issue throughout the divorce.  With the help of an experienced matrimonial attorney, like those at Snyder & Sarno, LLC, your property interests can be safeguarded to the maximum extent possible under the law.  Call us today at (973) 274-5200 if you need help with your divorce case.