How Involved Can my Ex be in Making Decisions Regarding the Kids? 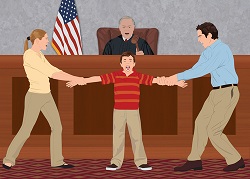 When figuring out a child custody arrangement, there are often many more considerations besides simply where the children will live or what the visitation schedule will be.  For example, one major consideration is how the parents will determine major decisions regarding the children in terms of their schooling or medical care.  Another issue is whether one or both parents will have access to school and medical records.  The recent case of Shakoor v. Mohammadi, involved parties that disputed these exact issues.

In Shakoor, the parties had two special needs children.  They argued over the extent to which the mother was required to inform the father of their schooling and medical care, and the extent to which the father was to be involved in their care. In the parties’ judgment of divorce, they agreed to share joint legal custody of the children, meaning the parties were to make major decisions regarding the children together. N.J.S.A. 9:2-4.  The parties also agreed to turn to an arbitrator if they had any disagreements when making decisions regarding the children.

The father challenged the mother’s actions in not involving him in the daily activities of the children’s schooling and medical care.  The trial court limited his involvement to “major and non-routine” decisions or activities and appointed a parenting coordinator, whose fees were allocated 75% to the father and 25% to the mother.  The father was unhappy with the court’s decision and filed a total of seven motions seeking reconsideration.

In a custody dispute, even small issues can lead to litigation and court involvement.  With the help of an experienced matrimonial attorney, like those at Snyder & Sarno, LLC, small disputes can be easily managed and resolved in an efficient manner. If you are struggling with your child custody case, contact us today at (973) 274-5200.