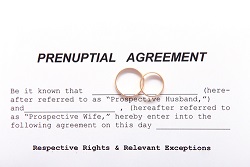 For couples that have significant assets or money, when it comes time for a proposal, not only is one fiancé given an engagement ring, but in many cases, the fiancé is also given a prenuptial agreement.  Prenuptial agreements typically contain a variety of terms specific to the couples’ financial situation and set out the parties’ rights in case of a future divorce.  For example, the New York Times recently reported that billionaire financier Ken Griffin released the terms of his prenuptial agreement, which are now being contested by his soon-to-be ex-wife, Anne Dias Griffin.  Under the Griffins’ prenuptial agreement, Ms. Griffin has already received $37 million in cash and half of their Chicago residence.  She is now arguing that she was forced to sign the agreement, and thus, it is invalid.

Prenuptial agreements are enforceable if they are “fair and just.”D’Onofrio v. D’Onofrio, 200 N.J. Super. 361 (App. Div. 1985).  Furthermore, the parties must fully disclose all of their assets prior to signing the agreement and the agreement must not be unconscionable at the time of signing.  Marschall v. Marschall, 195 N.J. Super. 16 (Ch. Div. 1984).  As is provided in N.J.S.A. 37:2-38, a prenuptial agreement can also be deemed unconscionable if a party did not enter into the agreement voluntarily or was not given the opportunity to consult with legal counsel or adequately waive that opportunity prior to signing the agreement.