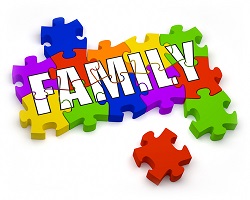 This case law has served as the precedent for psychological parents. However, the first requirement, parental consent to the relationship between the third party and the child, was at issue in a recently published case out of the New Jersey Appellate Division, K.A.F. v. D.L.M.

In that case, K.A.F. and F.D., after having been romantically involved for two years, decided to have a child together. They arranged for a sperm donor and K.A.F. carried the child.  Three years later, F.D. adopted the child with the consent of K.A.F., so that the child’s birth certificate reflected K.A.F. and F.D. as his parents. After K.A.F. and F.D. ended their relationship, K.A.F. became romantically involved with D.M., with whom she bought a house and formalized their domestic partnership a few years later. D.M. took on parenting responsibilities of the child when he was in her home with K.A.F. Eventually, K.A.F. and D.M. separated, but for one year D.M. had visitation with the child, until K.A.F. refused to allow any more visits. D.M. filed for visitation, and K.A.F. and F.D. opposed, claiming that F.D. had never consented to the relationship between D.M. and the child, and that, therefore, D.M. could not be found to be a psychological parent under V.C.

The Court then looked to whether the consent of both parents was required for a third party to be a psychological parent. The Court found that neither the Court’s language in V.C. nor the history or the policy behind the law supported the contention that both legal parents need to consent. Therefore, the Court held that only one parent must consent to the relationship between the third party and the child. Moreover, consent does not need to be explicit, but rather can be implied from the legal parent’s actions. However, the Court stated that the non-consenting parent’s lack of consent is a relevant factor in determining whether a third party is a psychological parent and may be considered when deciding what promotes the best interests of the child.

If you have questions or concerns about you or a third person being a psychological parent, please contact the experienced family lawyers at Snyder & Sarno at (973) 274-5200.