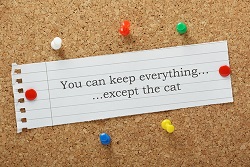 We recently blogged about the divorce between Melanie Griffith and Antonio Banderas.  Along with news of the split, TMZ also reported that Melanie Griffith will be seeking “custody” of the couple’s three dogs in the divorce.  This is not the first time that pet ownership has been a point of contention when a celebrity couple gets divorced.  We previously blogged about this issue in March when Olympic Figure Skater, Johnny Weir, took the dog after filing for divorce from his husband, Victor Voronov.  Pet ownership is often debated among divorcing couples.  In fact, the American Association of Matrimonial Lawyers released the results of a survey of its members earlier this year reporting a 27% increase in disputes over pets in matrimonial matters.

Those who own pets typically consider them to be a member of the family.  They are sometimes treated like a child, especially by couples that do not have children of their own.  Thus, when a couple decides to divorce, their pets often become a source of contention.

New Jersey law, however, typically treats pets as property.  A court will not award “custody” of a pet, but will instead, give one spouse ownership of the pet in the division of property.  Nevertheless, in the New Jersey case of Houseman v. Dare, the court recognized that pets have a “special ‘subjective value’ to their owners.” Therefore, a pet will be treated more like a family heirloom in property division and the court will account for the owner’s attachment to the animal.  For instance, in deciding who keeps the dog, the court may consider which spouse spent the majority of time with the dog, the dog’s needs, and whether the dog should follow the kids if one spouse is the children’s primary caretaker.  A couple could also share ownership of the pet pursuant to a sharing arrangement ordered by the court.

Custody of pets is just one potential issue in equitably dividing assets acquired during a divorce.  Other possible issues involved in equitable distribution are the division of the couple’s personal property and home, among other assets.  Divorce, and particularly the division of property, can be confusing and difficult to navigate without the help of an experienced matrimonial lawyer like the ones at Snyder & Sarno, LLC. If you plan to file for divorce or have been served with divorce papers, contact us at (973) 274-5200 for help with your case.