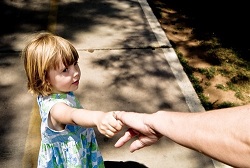 In a published decision, DYFS v. J.G., the New Jersey Supreme Court held that although a father served a prison sentence from the time his daughter was six months old until she was six years old, it was not a sufficient basis to terminate a father’s parental rights.

The father testified that he had taken care of the child until she was six months old, changing her diapers, feeding her, taking her to the doctor, and doing all of the things that parents do on a daily basis. However, when his daughter was six months old, he was arrested, convicted of second-degree eluding a police officer, and was sentenced to five years in state prison. While he was incarcerated, and when the child was four years old, the Division of Youth and Family Services (now the Division of Child Protection and Permanency) removed the child from her biological mother’s home because the mother was abusing alcohol and endangering the child’s well-being.

DYFS temporarily placed the child with her maternal grandmother and informed the father of this move. After the mother failed to stay alcohol-free according to DYFS’s reunification plan, DYFS presented a permanency plan, wherein they planned to terminate the parental rights of both biological parents so that the maternal grandmother could adopt the child. The biological mother voluntarily surrendered her parental rights, but the father wanted to maintain a relationship with the child, although he indicated that he would not be seeking custody. While incarcerated, the father sent letters to his daughter and voluntarily took classes on anger management, behavior modification, cognitive behavioral change, reentry preparation, and parenting.

The trial court found that DYFS had not demonstrated by clear and convincing evidence that the father’s parental rights should be terminated. Then, a majority of the Appellate Division reversed, stating that the father’s incarceration from the time the child was six months until she was six years old prevented a parental bond from forming and constituted harm to the child.

In New Jersey, every element of N.J.S.A. 30:4C-15.1(a) must be satisfied by clear and convincing evidence in order to terminate a person’s parental rights. This standard of clear and convincing evidence erects a high hurdle to overcome when trying to terminate parental rights. This protects even those parents who do not necessarily want custody of the child, but who wish to maintain a relationship with the child and who are not causing harm to the child.

If you have questions about your New Jersey family law matters, please contact the experienced attorneys at Snyder & Sarno at (973) 274-5200.