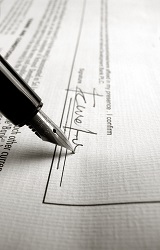 We recently blogged about a bill pending before Governor Chris Christie that, if passed, would allow adoptees access to their original birth certificates, and we promised to update you on the bill’s progress. On May 27, NJ.com reports, Governor Christie signed the bill into law.

The law, a result of compromise between the New Jersey Legislature and the Governor, will allow adoptees to access their original birth certificates. It does, however, protect the anonymity of birth parents by providing them with the option of choosing whether they would like to be contacted by their biological children either directly or through a confidential intermediary, or whether they would like to maintain their privacy and provide access to redacted medical records only.

For adoptions that are finalized after August 1, 2015, birth parents will indicate this preference on a form. For adoptions that have already occurred, the law does not go into effect until January 1, 2017. This gives time to educate birth parents about the law and to allow them to decide whether and how they wish to be contacted by their biological children.

For parents who choose to remain anonymous, they will still be encouraged to provide updated family information to the Health Department every 10 years until they reach age 40, and then every 5 years.

According to NJ.com, Governor Christie’s sister, Dawn, was adopted by his parents when he was 11 years old, his brother, Todd, was 9 years old, and she was 2. Before signing the bill into law, the Governor sought advice from her. When doing so, he asked her whether he could share his family’s story with the public to help them better understand, and she gave him permission to do so as it was “to help get to the right solution.”

This new law now allows adoptees to request their original birth certificates and to obtain important information, while still maintaining the privacy of the child’s biological parents.

If you have questions or concerns about your New Jersey family law matters, please contact the experienced attorneys at Snyder & Sarno at (973) 274-5200.