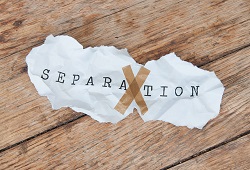 In New Jersey, the major difference between a divorce and a separation is that a divorce is a legal status that terminates the marriage. Alternatively, a separation is not a legal status and the couple remains legally married. If a couple wishes to physically separate in New Jersey, they can do so even though there is no such thing as a legal separation in New Jersey. Upon separation, the couple can, and often should, enter into a written separation agreement resolving matters such as spousal support, child custody, child support, equitable distribution, and any other matters that need to be resolved in order for the couple to live independently from each other.

The downside to a separation or a divorce from bed and board is that if either person wishes to remarry, they can’t legally do so. This is because the couple is still legally married to each other. However, if the couple wishes to reconcile, it is easy for them to do so because they are still legally married. Even if the couple obtained a divorce from bed and board, they could jointly request that the judgment be vacated so that they could continue life as a married couple.

Alternatively, if a couple obtains an absolute divorce, their marriage is terminated and each person is free to remarry whomever they want. However, if the couple reconciles, they must get married to each other all over again.

Entering into a separation agreement, obtaining a divorce from bed and board, or obtaining an absolute divorce all have their own set of complex legal issues and many positives and negatives to consider. Before making a decision on how to terminate your relationship, you should discuss these options with an experienced New Jersey divorce lawyer, who will be able to help you determine which option is best for your particular situation.