Grandparents Have Rights, Too! 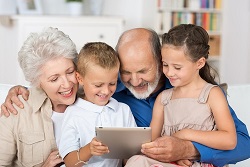 Sometimes, when a child’s parents separate, when one of the parents dies, or when there is a falling out in the family, grandparents are no longer permitted to see the child, or cannot see the child as often as they would like. Often, and especially if there was a close relationship between the child and the grandparent, the grandparent will ask the court to grant him or her visitation with the child. A recent case, Major v. Maguire, explains what the court must consider when deciding whether to award the grandparent visitation.

In this case, the unmarried parents of a six-year old child separated. The father was diagnosed with cancer, and even though they had ended their relationship, the parents equally shared the parenting responsibilities for the child. As the father’s health deteriorated, the communication between the child’s paternal grandparents and the mother deteriorated as well, and when the father died, the relationship between the paternal grandparents and the mother reached an impasse.

The trial judge found that the grandparents did not prove harm to the child, and added that “before engaging the courts, grandparents should be obliged and obligated to make substantial efforts at repairing the breach, if any. In addition, litigation, ordinarily, should not be threatened before visitation has been denied with finality . . . Unfortunately, when we come to court and we rush to court before we have even explored those options, it creates an even greater strain on the relationship.”

We suggest the judge meet with the parties and counsel, if available, as soon as practical after joinder of issue, to determine, on the record: (1) the nature of the harm to the child alleged by plaintiff; (2) the possibility of settlement through mediation or as otherwise provided in Rule 5:5-5; (3) whether pendente lite relief is warranted; (4) the extent to which any of the facts related to the statutory factors identified in N.J.S.A. 9:2-7.1(b)(1) through (8) can be stipulated by the parties; (5) whether discovery is necessary, and if so, the extent and scope of the discovery, as permitted by Rule 5:5-1(a), written interrogatories, production of documents, Rule 4:18-1, request for admissions, and consent to release documents not within the possession of the party — discovery may be completed within the time allotted in Rule 5:5-1(e), or as otherwise ordered by the court; (6) whether expert testimony will be required, and if so, the time for submission of the expert's report and curriculum vitae, the time for submission of defendant's rebuttal report if any, and whether deposition of the expert(s) will be required or permitted; (7) a protocol for the filing of motions, including motions to compel discovery, motions seeking protective orders to exclude or limit evidence based on an assertion of privilege, or because the release of the information would adversely affect the child's best interest, or unduly infringe upon the privacy rights of the custodial parent; and (8) a tentative date for the filing of dispositive motions and/or a plenary hearing if necessary to adjudicate plaintiff's complaint and resolve any material facts in dispute.

Because the trial judge did not analyze the statute or the R.K. factors in his decision, the Appellate Division reversed and remanded the case to reexamine the grandparents’ visitation request under the proper standards. The Appellate Division also advised the lower courts to avoid allowing their personal views to play a role in deciding a case’s legal viability, especially when the proper standard has been codified by the Legislature as a matter of public policy, like in the instant case.

Clearly, determining grandparent visitation is a fact-sensitive inquiry and no two cases are the same. In order to obtain visitation, grandparents must show not only that it is in the best interests of the child, but that disallowing visitation will harm the child. The court must then analyze the grandparents’ claim under the statute and under R.K. This can be a high hurdle to overcome.

If you want to learn more about your rights in your grandparent visitation case, please contact the experienced New Jersey family lawyersat Snyder & Sarno at (973) 274-5200.