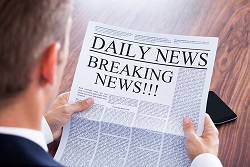 Roseland, NJ – The law firm of Snyder & Sarno, LLC announced today that it has been retained to serve as the new counsel for Sean & Elizabeth Canning in the complaint filed against them by their daughter Rachel Canning.

The case has received widespread national media coverage as it directly challenges the degree to which government may or may not intervene in the rules and decisions parents must inevitably make for their children in intact families.

In taking on this case, lead attorney Angelo Sarno stated that the case is without any legal merit.  Certain cases should not see the inside of a courtroom.  This is one such case.  Government cannot police the day to day financial affairs of parents and their children while the family is intact.  The case must be resolved quickly between the parents and child, preferably without involvement of the Court and/or legal counsel.  The longer this case remains pending the greater the divide created between parent and child will grow.  It is the goal of the Cannings to be present at their child’s graduations, her wedding and at the birth of their grandchildren.  That will never be a possibility until and unless this matter is brought to a swift and amicable conclusion.  If one cannot be reached, it is our intention to move expeditiously for a dismissal of this case on the basis it fails to state a claim for which legal relief can be granted.  The Cannings want this matter behind them so they begin the healing process with their family.

Sarno also made an impassioned plea that the media respect the privacy of the Cannings. “Obviously, they are heartbroken by all that has transpired.  This is a difficult time for them, made even more difficult by the level of publicity that the case has received.  As such, they will have no further comments to make until this matter is fully resolved. While I ask that you respect their privacy, my office will do its best to keep the media updated when there is anything new to report. In the meantime, any questions should be directed to Snyder & Sarno.”

Mr. Sarno is a Partner in the law firm of Snyder & Sarno, LLC. He is certified by the Supreme Court of New Jersey as a matrimonial attorney. The firm focuses primarily on family law matters.