Protecting Your Child from Your Ex's Significant Other

When can the Court restrain a parent from allowing unsupervised contact between his/her child(ren) and his/her significant other? 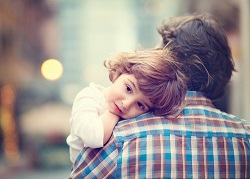 An issue that often comes up in legal disputes involving children is whether significant others should be allowed to spend time with the parties’ children. Generally, once the New Jersey divorce is finalized, it is rather difficult for a parent to restrain the other parent’s significant other from having contact with the children.   To do so, you usually must provide the court with evidence of why the person should not have contact with the children.

This issue was raised in a recent unpublished New Jersey Appellate Division case, Krenicki v. Krenicki. [1]   In this case, the parties, George and Francine, were married in 1996 and divorced in 2007.  They had two children together.   In 2011, the parties were involved in post-judgment litigation.  During that litigation, George filed an application with the court, requesting that restraints be placed on Francine, prohibiting unsupervised between Francine’s boyfriend and the parties’ children.

George, after hiring a private investigator, discovered that Francine’s boyfriend had been convicted of several drug-related offenses.  Francine opposed George’s application for these restraints, and submitted to the Court a certification from her boyfriend, indicating that he had been rehabilitated.

The judge ordered the Bergen County Probation Department to investigate this further.  After the investigation, the father sought that permanent restraints prohibiting the mother’s boyfriend from having unsupervised contact with the children continue.

Because the court found that the boyfriend had significant substance abuse issues, the judge prohibited him from driving the children or having unsupervised contact with them. In addition, to be “even-handed fair,” the motion judge, who acknowledged that she possessed no information about George’s girlfriend, ordered the same restraints against George.  As a result, George’s girlfriend was not permitted to have any unsupervised contact with the children.

The Appellate Division reversed the ruling with respect to George’s girlfriend. The Court held that the motion judge’s order was unsupported by competent evidence and thus must be reversed.

If you are concerned about your ex-spouse’s new significant other having contact with your children or have any questions about your legal rights, you should speak to an experienced family law attorney.   As you can see from the case of Krenicki v. Krenicki, the Court has the ability to restrain parties from exposing children to his/her significant other after a divorce.  Obviously, this is a fact sensitive issue and you must have competent evidence that would persuade a Court to enter these restraints.

If you have questions about your New Jersey divorce or post-divorce issues, please contact Snyder & Sarno at (973) 274-5200.