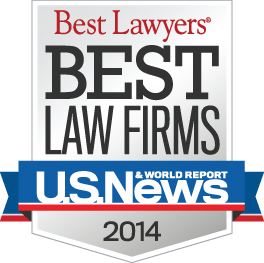 U.S. News & World Report and Best Lawyers, has named Snyder & Sarno in their 2014 “Best Law Firms” rankings.  Firms included in the 2014 “Best Law Firms” list are recognized for professional excellence with persistently impressive ratings from clients and peers.  Achieving a ranking signals a unique combination of quality law practice and breadth of legal expertise.  "U.S. News has more than two decades of experience in providing the public with the most accurate and in‐depth rankings of a wide range of institutions, including our Best Law Schools rankings," says Tim Smart, Executive Editor of U.S. News & World Report. "Law firms are an integral part of our rankings and a natural accompaniment to the law school rankings."  The 2014 rankings are based on the highest number of participating firms and highest number of client ballots on record. Over 12,000 attorneys provided over 330,000 law firm assessments, and almost 7,000 clients provided close to 20,000 evaluations. In addition, to provide personal insight, a new Law Firm Leaders Survey was implemented in the decision‐making process.  “Because we combine hard data with peer reviews and client assessments,” says Steven Naifeh, President and Co‐Founder of Best Lawyers. “More and more clients inform us ours are the most thorough, accurate, and helpful rankings of law firms ever developed.”  Ranked firms, presented in tiers, are listed on a national and/or metropolitan scale. Awards were given in 74 national practice areas and 120 metropolitan practice areas. Snyder & Sarno was named as a Metropolitan Tier 1 Law Firm.  We are extremely proud of our listing in the 2014 “Best Law Firms.”  The rankings can be seen in their entirety by visiting BestLawFirms.USNews.com.

**Disclaimer: No aspect of this advertisement has been approved by the Supreme Court of New Jersey.