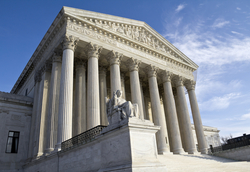 The Supreme Court of New Jersey has agreed to hear a potentially historic palimony case on the petition of matrimonial attorney Angelo Sarno of the law firm of Snyder & Sarno. In hearing the case of Maeker v. Ross, the Supreme Court will decide on the matter of whether oral support agreements between non-married parties can be enforced in certain circumstances, despite January 2010 legislation that required such agreements to be made in writing.

Beverly Maeker, represented by Mr. Sarno, had been granted pendente lite support of $6,000 a month by a Family Part judge, to be paid by William Ross until the commencement of Ms. Maker’s palimony trial. Ms. Maeker and Mr. Ross had been involved in a marital-type relationship for 13 years; however, New Jersey does not allow for common law marriage. Ms. Maeker claimed that Mr. Ross made oral promises of lifetime support.

In February 2013, New Jersey’s Appellate Division reversed the decision of the Family Part judge, stating that the January 2010 amendment to the Statute of Frauds precluded enforceability of the oral palimony agreement, regardless of when it was entered into by the parties. Mr. Sarno will argue before the seven-member Supreme Court of New Jersey that the Appellate Division acted unjustly in retroactively applying the statute to bar Ms. Maeker from enforcing the palimony agreement.

The Supreme Court of New Jersey accepts only a select few cases each year. If the Court decides in favor of Mr. Sarno, its ruling would allow an entire class of individuals who had entered into oral palimony agreements prior to January 2010 to enforce those agreements in a court of law.

Mr. Sarno will argue that, although Ms. Maeker filed her initial complaint on July 8, 2011, the oral palimony agreement pre-dated the January 2010 amendment. The relationship between Ms. Maeker and Mr. Ross commenced in 1998 and lasted until July 1, 2011. Over the span of the relationship, Mr. Ross supported Ms. Maeker and paid the majority of her son’s college-related expenses, promising repeatedly that he would take care of her financially for the rest of her life.

In delivering the opinion of the Appellate Division, Judge Paulette Sapp-Peterson wrote that “the Amendment is enforcement legislation that addresses under what circumstances a claimed breach of a palimony agreement may be enforced irrespective of when the purported agreement was entered.”

Mr. Sarno characterized the Appellate Division’s ruling as “manifestly unjust,” further stating that the law firm is “proud that we were able to persuade the Supreme Court to hear this case.” The Maeker v. Ross Supreme Court trial will be broadcast live on the New Jersey Courts website.

About Angelo Sarno and the Law Firm of Snyder & Sarno

Angelo Sarno is a partner in the law firm of Snyder & Sarno. He was the youngest attorney in the history of New Jersey to be certified by the state’s Supreme Court as a matrimonial attorney.  A perennial inclusion in New Jersey Super Lawyers, Maeker v. Ross represents one of the most distinguishing cases of his career to date.

Further information about the law firm of Snyder & Sarno and Maeker v. Ross can be obtained by visiting the practice website or by contacting the firm at: