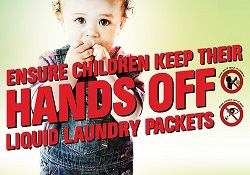 The Wall Street Journal recently reported on a growing issue in the United States—an increased number of poisonings, and even death, due to concentrated laundry packets.  Thus far, there have been seven fatalities due to the detergent packets.  The laundry packets have injured many others, especially children.

In fact, there have been an average of 30 reports of child poisoning per day involving children under age six.  Elderly patients with dementia have also been at risk for poisoning when they mistakenly bite into the laundry packets.

Scientists do not know why laundry packets are more harmful than regular liquid detergent.  Ingesting the packets’ contents can cause side effects such as vomiting or difficulty breathing.

Proctor & Gamble Co. is the leading producer of detergent packets.  The company is currently defending itself against a multitude of lawsuits brought my individuals or their family members alleging injury due to the packets.  As the packets gain popularity, the number of injuries caused by their contents has risen as well.

In addition, manufacturers have made alterations to the packaging in an attempt to reduce risk.  For instance, manufacturers have added “child-resistant closures” or opaque, rather than clear and multi-colored, packaging.  They have also added more warning labels.  Members of Congress have also acted in response to the issue by proposing legislation that would require stricter safety standards for laundry packets.

If you or a loved one was injured or died after exposure to or ingestion of a concentrated laundry detergent packet, you may have a legal claim against the manufacturer.  Call Paul M. da Costa, Esq. at Snyder & Sarno, LLC at (973) 274-5200 for help with your case.