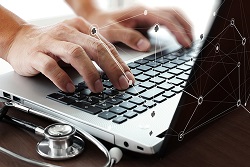 Medical records are increasingly being stored in electronic form for ease of physical storage and efficiency.  This technological innovation, however, has led to numerous errors in electronic records that are becoming the focus in many legal cases, as Politico.com recently reported.

Most cases involve problems such as typing errors or reliance on old records that lead to prescription of the wrong medication or errors in patient status updates.  Oftentimes, what is recorded electronically does not match what is in the record when it is printed.  In some cases, doctors misread what a nurse selected from a drop-down menu of options. In one case, a woman stabbed herself with a metal fork, but when a nurse selected the “unknown/last five years” tab regarding the woman having received a tetanus shot, the doctor believed she didn’t need one.  She eventually died from tetanus.

Because of the many mistakes, experts are calling for Congressional action to regulate electronic health records.  Though calls for an IT safety center to monitor and fix problems have been proposed, little action has been taken.

Also, in most cases, doctors sign a contract with the provider of their electronic health record service that releases the provider from any liability, leaving the doctor responsible for discrepancies in the software.  Many predict, however, that plaintiffs will soon begin suing providers, who are often seen as having money to pay large judgments.

If you or a loved one was injured because of medical malpractice, electronic health records could have played a part in causing that injury.  You may have a case against a doctor, hospital, or even electronic health record vendor, who caused your injury.  If you want to evaluate your case, call Paul M. da Costa, Esq. at Snyder & Sarno, LLC at (973) 274-5200.