How to Pick the Right Nursing Home 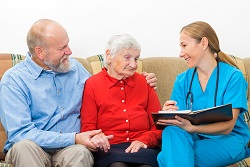 While other research suggests New Jersey nursing homes have other problems, such as high fall rates, most data is self-reported and unreliable.  Moreover, there is little enforcement to solve any nursing home problems.  Critics argue that major reform is necessary.

Some relief, however, may come in the form of federal legislation.  In October, President Barack Obama announced plans to overhaul current nursing home legislation on the federal level to provide protection for elderly residents.  Nevertheless, more reform is still needed

If you or a loved one suffered harm in the form of bed sores, pressure ulcers, decubitus ulcers, fall-down fractures or general neglect while in the care of a nursing home, you may have a nursing home malpractice claim.  To get fair compensation for your injuries, contact Paul M. da Costa, Esq. at Snyder & Sarno, LLC.  Call us today at (973) 274-5200.