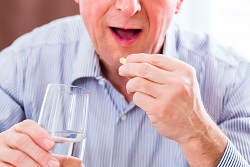 It’s a fact of life that as people get older, they often turn to prescribed medications to prevent or cope with ailments caused by age.  Some drugs, specifically antipsychotics, can have serious side effects for the elderly, including heart disease and infections.  Although the government promoted disuse of these drugs among the elderly, many nursing homes still give these drugs to their residents.

A recent study by NPR suggests that despite the government’s warnings, it fails to penalize nursing homes for non-compliance.  Oftentimes, these drugs are used to sedate residents who suffer from dementia, and anxiety as a result.  Critics, however, suggest there are alternative ways to deal with anxious patients; for example by pinpointing their anxieties to begin with and acting accordingly.

Though the use of antipsychotic drugs among nursing home residents has decreased, there are still far too many residents receiving such drugs.  If nursing home staff overmedicated your loved one, he or she may have a medical malpractice claim to compensate for any injuries suffered.  The experienced attorneys at Snyder & Sarno, LLC can help.  Call us today at (973) 274-5200 to have your legal questions answered.