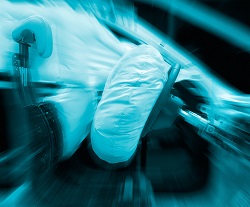 The widespread recall of millions of automobiles due to a defective airbag has received intense public scrutiny over the past couple of months.  In our previous blog, we discussed how the National Highway Traffic Safety Administration recently demanded that the airbag manufacturer, Takata, submit records and answer questions regarding the defect.

The New York Times reported on new evidence that Takata may have known of the defect for nearly a decade, but failed to alert regulators of the potential problem.  Former workers allege that after one accident in Alabama where the airbag exploded sending metal shards at the passengers, the manufacturer conducted secret tests on 50 airbags that it obtained from junkyards. The employees allege that Takata ordered them to perform the tests after-hours and then to delete any record of having performed the tests.  These tests occurred four years before Takata admitted in regulatory filings to have begun investigating the defect.

Further evidence suggests that in the early 2000’s, Takata had quality control problems relating to their handling and production of airbags.  Some airbags were delivered to carmakers wet due to transportation problems.  Other airbags were dropped from forklifts or delivered damaged.  In order to fill large numbers of orders, Takata failed to properly inspect the airbags for damage.  In addition, as late as 2009, Takata was still fixing problems with at least one of its airbag producing machines.  Evidence suggests, however, that Takata was lax in enforcing reforms aimed at addressing quality control and handling problems.

Problems with defective airbags will continue to be investigated and hopefully fixed.  In the meantime, defective airbags could give rise to a multitude of litigation against the airbag manufacturer or automakers.  If you or a loved one has been injured by a defective airbag, or any other defective car part, you may have a product liability claim.  The experienced attorneys at Snyder & Sarno, LLC can help you gain compensation for your injuries.  Call us today at (973) 274-5200.