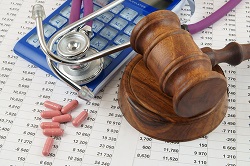 In addition, Reuters interviewed Dr. Daniel Waxman, the chief author of the study.  Dr. Waxman stated that the persistent belief that defensive medicine drives up the cost of medical care prevents investigation into other methods that could decrease the cost of health care.  In the interview he also calls the legal system a “convenient scapegoat” for the perceived problem and says that malpractice reform is a “blind alley.”

Professor John Thomas, of the Quinnipiac University School of Law in North Haven, CT also commented on the Rand study in an article posted on HealthDaily.com. He said that the study reinforces the idea that doctors make decisions based on medical need, not “fear of litigation.”  Furthermore, he stated that the malpractice reform legislation is clearly being shown to be inadequate.

Because malpractice reform has now proven ineffective, state legislatures may be unwilling to enact such laws in the future.  This effectively means that claimants will have more access to the courts when bringing a medical malpractice claim.

If you or a loved one has been injured as the result of a doctor’s negligence, you may have a medical malpractice claim.  The experienced attorneys at Snyder & Sarno, LLC can help you obtain compensation for your injuries.  Call us today at (973) 274-5200.