Are Hip Fractures a Death Sentence for Nursing Home Residents? 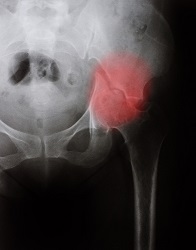 Every year, over 250,000 Americans over the age of 65 suffer from a hip fracture.  Hip fractures are often caused by falls, and can result in devastating consequences for the patient or their families.  A recent article posted on Thomson Reuters website reported that elderly patients have a very high rate of death or immobility after suffering a hip fracture while living in a nursing home.  In fact, the rate is as high as 50% of patients dying or being unable to walk in the 6 months following a hip fracture.

The article reported on a study conducted by Dr. Mark D. Neuman of the Perelman School of Medicine at the University of Pennsylvania.  Dr. Neuman and his team studied approximately 60,000 patients who were hospitalized for hip fractures and subsequently returned to their nursing homes over a four year period.  The study found that about one-third of residents had died 6 months post-treatment, including half of men.  Approximately another one third became dependent on others to move around.  Overall, half of patients died within one year.  The study concluded that prospects post-treatment were also worse for those residents over the age of 90.  Other researchers have concluded that while 50% of nursing home residents will die post-hip fracture, only about 20% of those who reside outside of nursing homes will die after being treated for that same injury.

It is also the responsibility of the nursing home to ensure that each resident receives adequate care, as per New Jersey law.  A nursing home can be held liable if a resident suffers a hip fracture as the result of a fall caused by the nursing home’s negligence or failure to adequately care for their premises.

If you or a loved one suffered a hip fracture while living in a nursing home, whether caused by a fall or not, the knowledgeable attorneys at Snyder & Sarno LLC can help you get compensation for your injuries.  Whether the injury was caused by a nursing home’s failure to provide proper care, the nursing home’s negligence in maintaining its premises, or a doctor’s failure to provide the patient with all necessary information regarding treatment, you could have a personal injury or medical malpractice claim.  Call us today at (973) 274-5200 for help with your case.