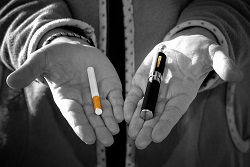 On May 15, 2014, the Senate Health, Education, Labor and Pension Committee was scheduled to hold a hearing on electronic cigarettes in light of the Food and Drug Administration’s (FDA) recent decision to regulate the products for the first time.  As reported in the New York Times on April 15, 2014, a study presented earlier this year reported that “the nicotine laced vapor generated by an electronic cigarette promoted the development of cancer and certain types of human cells much in the same way that tobacco smoke does.”

The study was conducted by scientist from various universities and medical centers, such as Boston University, The University of Texas Southwestern Medical Center and the University of California, and the study was funded by the National Institutes of Health. The scientists involved in the study reported they found cells exhibiting changes associated with cancer when exposed to electronic cigarette vapor. The lead scientist involved in the study stated that the findings emphasize how little is known relating to the long-term effects of electronic cigarette use, as well as how little is known about long-term effects of the ingredients within the devices.

If you have any questions or concerns about your medical malpractice, or personal injury issues, please contact the experienced attorneys at Snyder & Sarno at (973) 274-5200.